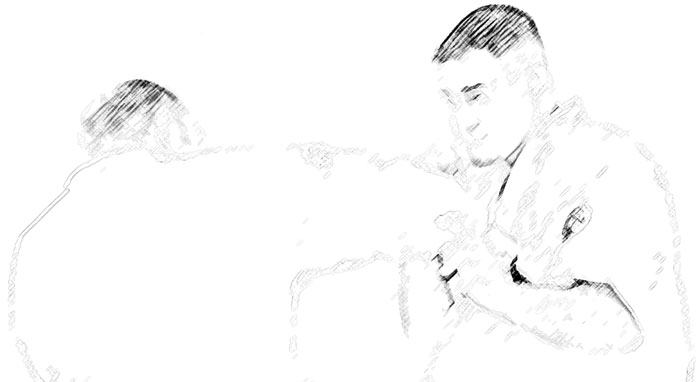 Last year a young man from the North East of  Japan came to our dojo to talk to me. He said he had been training in another  style of Karate for many years, but that he had always respected Mas Oyama and  that he wanted to train Kyokushin Karate. He said he had started training  Kyokushin from books as persons like himself living in local areas, don’t have  the time or opportunity to come to Tokyo or to travel long distances to other  dojo’s around the country. He then went on to explain how he had accidentally  met a person in his town who was a Kyokushin Black Belt and who kindly offered  to teach him Kyokushin. This person was then 20 years old and our story-teller was 25. He said that he was aware of the age difference between himself and the Black Belt, and the fact that he had more Karate experience and a higher  position in society. However he decided to train anyway, as he wanted to do Kyokushin so very much.

At first, he said, the young Black Belt was kind enough to say that he was a Kyokushin Karate Senpai, but not a Sensei. He was very modest and our friend felt that this was truly Kyokushin spirit. He entered training with new freshness. However, before long more students attached themselves to the Black Belt and they started to call him “Sensei”. From then on he changed, and he actually decreased the amount of time he spent teaching compared to before. He became just like a little businessman. He forgot his  first words and ordered our friend to call him “Sensei”, too. Our friend however, said that he believed that his true teacher could only be Mas Oyama and did not follow the words of the young teacher. Eventually, our friend could not follow him anymore and left with about 150 students to start his own school.

This long story helped me to understand the troubles that arise from the Senpai/Kohai relationship. Now please consider this second story. One of my students came to me and informed me that he intended to stop training. I was  surprised because he was a very diligent student and had good talent. When I asked him why, he answered that he had become tired of the business of relationships between Senpai and Kohai. He explained that he was older, more intelligent and had a better education, that he was also bigger and that if they were to truly fight he could beat many of his Senpai. However, despite all this, he was required by the Senpai/Kohai pattern to be “small” in front of all Senpai. He explained further that he could understand and accept this when in the dojo, but that he resented having to be small and to have to osu so frequently when meeting Senpai in front of friends or company  juniors.

I couldn’t say anything upon hearing this, just “umm”. I feel today’s trend is not healthy. As soon as a young man gets Black Belt he wants to be called Sensei and to teach. This attitude is rubbish! And I believe we must break this kind of bad custom. It is ridiculous for a Senpai to make a “Big Face” simply because he started Karate one year or so earlier. If this Senpai has a good personality, intelligence, and if this person is strong in Karate, the Kohai will respect him   naturally. However, nothing ever goes so perfectly and this is why Sempai/Kohai  stress arises. I teach my Uchi-Deshi everyday that all Senpai must have the virtue of modesty, and if a Senpai never forgets this a Senpai doesn’t have to try to be a Senpai he will become one naturally, and will easily create a good, balanced relationship with all his Kohai. Once a  dojo or organization becomes big, human relationships become very important, and once you are in society you cannot live without thinking about the problem of seniors and juniors. I want you to read this and think carefully about Senpai (senior) and Kohai (junior) with me.